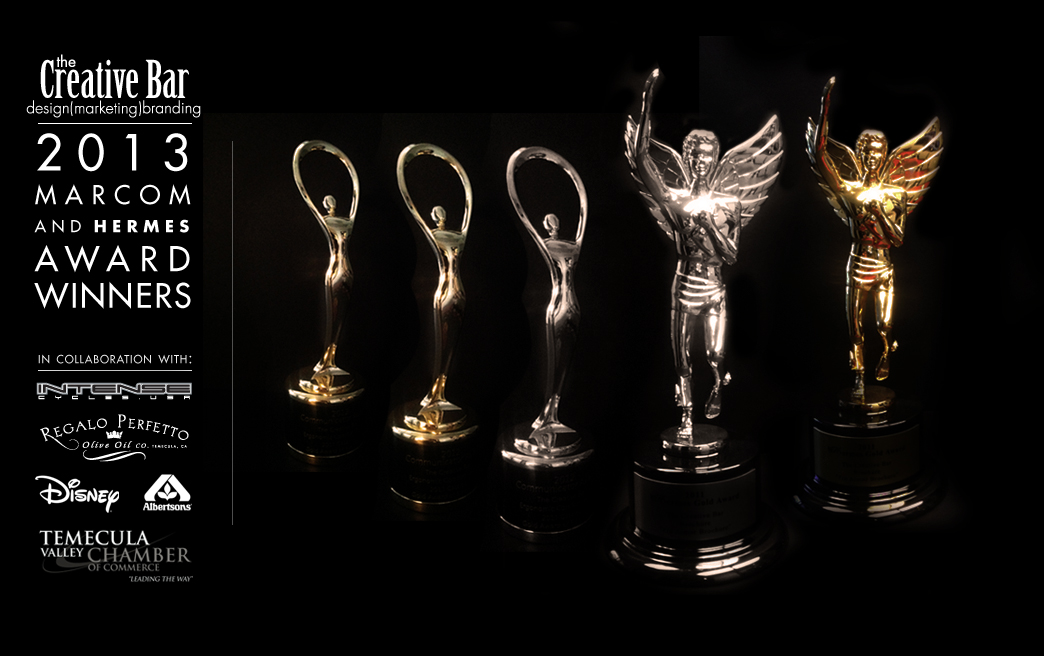 It’s only the first week in May and The Creative Bar, a leading Southern California design, marketing and branding firm, has already won eleven national design & advertising awards for 2013. This week, The Creative Bar accepted five awards for their work with Intense Cycles, Temecula Valley Chamber of Commerce, Regalo Perfetto, Hollywood Post Alliance and Disney/Albertsons.

With over 6,000 entries received from across the U.S. and around the world, the Communicator Awards is the largest and most competitive awards program honoring the creative excellence for communications professionals. The Communicator Awards are judged and overseen by the International Academy of the Visual Arts (IAVA), a 600+ member organization of leading professionals from various disciplines of the visual arts dedicated to embracing progress and the evolving nature of traditional and interactive media.

On Wednesday, The Creative Bar was thrilled to be notified by Hermes Creative Awards of its Platinum award for the Hollywood Post Alliance website re-design as well as the Gold award for the Disney/Albertson’s collaboration crate design. Hermes Creative Awards is an international competition for creative professionals involved in the concept, writing and design of traditional materials and programs, and emerging technologies. Over 5,600 entries in 2013 came from corporate marketing and communication departments, advertising agencies, PR firms, graphic design shops, production companies, web and digital creators and freelancers. Hermes Creative Awards recognizes outstanding work in the industry while promoting the philanthropic nature of marketing and communication professionals.