Best Time to Buy Throughout the Year 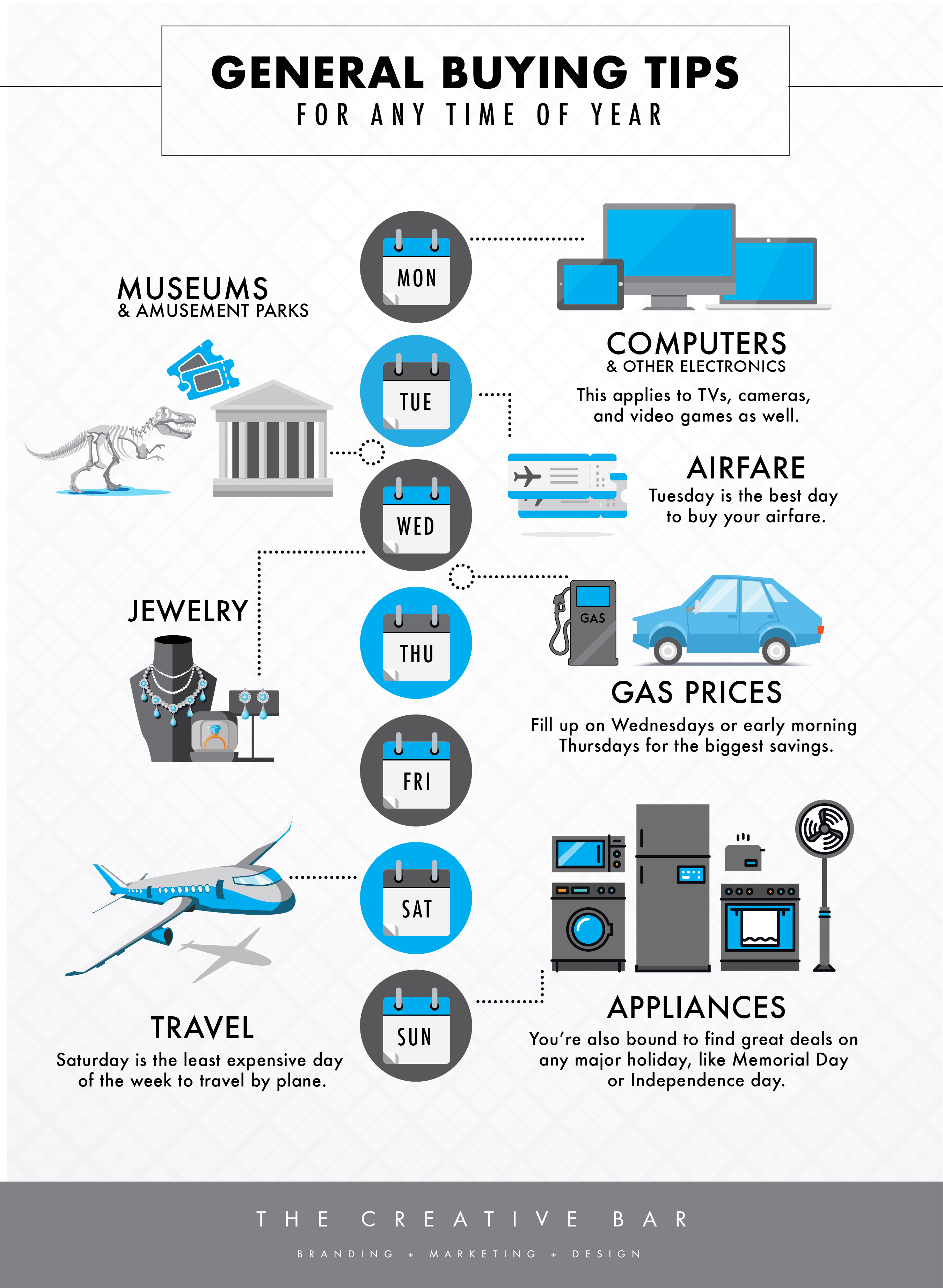 Whether you’re shopping for dress shoes or office furniture, there is always a “best time to buy” certain products. While more obvious reasons like upcoming product launches and off seasons can contribute to cost-cutting, there is a multitude of obscure causes of which the average consumer is unaware. Check out some of our favorites for businesses below:

Computer Monitors: There are multiple times that you can grab monitors for cheap (Black Friday, anyone?), but the January and February clearance time is a great one.

Broadway Tickets: Have a client that likes a good show? Broadway’s slower months are in the winter and fall, so January’s a great time to seek out some discounts. You probably won’t find them for the more popular shows, but if you’re looking to branch out, this is the time to do it.

Carpeting & Flooring: Most people buy carpets at the end of the year in preparation for the holidays. Once January rolls around, prices will go down.

Furniture: Different furniture is better at different times of the year, but January is a great general clearance time, since most furniture companies release new products twice a year: in February and August. That means they’ll be giving some sweet deals in January to make room for the new products next month.

Gift Cards: Like to send gift cards to clients or staff? It isn’t quite as “official,” but just after the holidays is a great time to go onto gift card exchange sites like Plastic Jungle to find discounted gift cards. This time of year, everyone’s trading in their unwanted cards for cash.

Suits: Not a lot of people buy suits in January, so you may see prices drop to get you into the store. Remember, though, you get what you pay for, so don’t go too overboard with the cost-cutting.

Cellphones: Valentine’s Day may seem like a strange time for cellphone sales, but you can often find buy-one-get-one-free sales in the “theme” of the holiday.

Televisions & Home Theaters: If you’re looking for a new screen for the conference room, now is a great time. You won’t find every TV on sale during the pre-Super Bowl sales, but you can usually find a good deal on older models before they come out later in the spring.

Golf Clubs: We know a few of you prefer to take meetings on the green. New models are coming out for the summer, so your local golf shop is pushing the old ones out the door. Grab last year’s set cheaply and you’ll forget all about how awesome the new ones are.

Luggage: It’s in between vacation seasons, so shops are dropping prices. Grab any extra bags you might need for business travel in March.

Televisions and Other Electronics: Japanese manufacturers’ fiscal year ends in March, so they’re eager to get rid of old stock. This will probably be better than the Super Bowl sales, provided you’re okay with buying last year’s model.

Digital Cameras: Want to take better photos for social media? Digital cameras start going on sale in February, after the new models have been announced at the January Consumer Electronics Show. However, if you’re looking for the best deals, you’ll find it in the second quarter of the year—as long as you’re okay with buying a slightly older model.

Refrigerators: They’re not considered a common business expenditure, but every breakroom needs one. While most big appliances go on sale later in the year, refrigerators are the big exception. New models come out in May, so last year’s models will get discounted.

Office Furniture: If you shop after tax day—when most home businesses start up—you can usually find some great deals on those office chairs and desks.

Computers: Intel and AMD start ramping up for new stuff in July, and back-to-school sales get pretty good around this time too.

Furniture: July is the other big clearance month for furniture, since new stuff is coming out in August. Check out the clearance sales for some good steals.

Interior Decor: From lamps to artwork for those bare office walls, you’ll find lots of home decor on sale for the middle of wedding season.

Storage Containers: As the kids head off to college, lots of stores have sales on new dorm supplies. You can take advantage of this opportunity to declutter your workspace and get organized.

Office Furniture: Another benefit of those back-to-school sales—whether you’re a college student or not.

Office Supplies: Again, back to school sales mean good deals on lots of office supplies. You can either buy now, when the sales are going on, or later in September, when stores are getting rid of leftovers.

Cars: New cars usually come out at the end of the summer, so lots will be clearing out the current year’s models around this time. It should be easier to haggle down the price for your new company ride, too. Buy at the end of the month for extra savings. This is also a good time to lease, since it’s when the banks estimate a car’s residual value.

Holiday Airfare: You should always aim to buy plane tickets at least two months in advance, so if you’ll be doing any business travel over the holiday season, now is the time to prepare before major price hikes.

Wine: It’s harvest time, which means this is the best time to stock up on wine for gifting to clients.

Digital Cameras: There is often a second round of new camera announcements in September, so check out the older models for a reduced price after the new ones come out.

Plants: If you’re looking to spruce up the place and your office temperature is fairly regulated, you can pick them up now pretty cheaply.

Broadway Tickets: Yet another off-month for Broadway shows, so grab your tickets now for less.

Appliances: According to Dealnews, November will net you the absolute best prices in the Fall appliance sales.

Televisions & Other Electronics: Hit the stores during Black Friday and Cyber Monday for good deals on all sorts of electronics. Make sure that deal you find is really a deal before pulling the trigger, though.

Champagne: Again, this is one of those few times that prices drop because demand is so high. Champagne companies are all trying to compete with each other, so grab it now for your holiday celebrations and New Years gifts.

Golf Clubs: It’s the off-season, so golf clubs are cheaper to come by.